On October 24, 2019 at 2:34am the Clermont County Communications Center received numerous 911 calls from residents in the 4300 block of Armstrong Blvd. in Batavia Township, reporting a disorder outside along with multiple gunshots heard in the area. Deputies arrived on scene at 2:41am and discovered that all parties involved in the disorder had fled the scene.

At 2:43am, the Communication Center was contacted by Clermont Mercy Hospital reporting that two adult males walked into the Emergency Room, one suffering a single stab wound to the left side of his neck and one with multiple gunshot wounds to his arm and back.

Central Joint EMS transported the stabbing victim, who was identified as 21 year old James A Ciminillo of Cincinnati, from Clermont Mercy to University Hospital by life squad. Ciminillo is currently in stable condition and his injury is reported to be non-life threatening.

Clermont Mercy evaluated the shooting victim, who was identified as 18 year old Dominic Richey of Union Township Clermont County, and requested Air Care to respond.  Richey was transported to University Hospital in Cincinnati by Air Care at 3:31am. Richey is currently in stable condition and his injuries are reported to be non-life threatening. Update: AS OF 09:35 am, University Hospital reports that Ciminillo was treated and released.

The Clermont County Sheriff’s Office Investigative Unit responded and are currently interviewing parties involved in the incident, along with multiple witnesses. The Sheriff’s Crime Scene Unit also responded to process the scene.

Nolan E. Garrett, age 18 of  Batavia Township has been charged with one count of Felonious Assault, a felony of the second degree.  Nolan Garrett is currently being held in the Clermont County Jail without bond. He will appear for a bond hearing at 10:00 A.M. on Friday October 25th  2019 in Clermont County Municipal Court. The case will be reviewed with the Prosecutor’s Office for consideration of additional charges to be presented to a Grand Jury.

Anyone with information related to this incident is encouraged to contact Sgt.Boerger of the Clermont County Sheriff’s Office at 513-732-7545 or 732-7510

This Investigation is ongoing at this time. 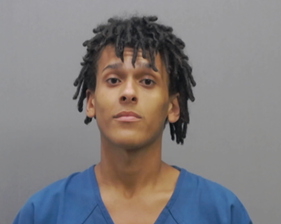