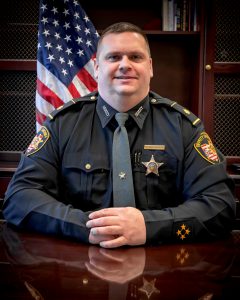 Major B.J. Boerger is a 1996 graduate of Batavia High School and a veteran of the United States Army Reserves (1997 to 2003). He graduated from the University of Cincinnati-Clermont Police Academy Class #9 and was certified by the Ohio Peace Officer Training Association in 2000.  He began his career with the Clermont County Sheriff’s Office in 2000 as a Corrections Officer in the Jail.

In 2002 Major Boerger was promoted to the road patrol as a deputy where he served in the following capacities:  Batavia Township contract car from 2004-2008, a detective in the Investigations Unit from 2008-2013, Sergeant on the road patrol from 2013-2017, and Detective Sergeant in the Investigations Unit from 2017-2021.  He was promoted to the rank of Major and assigned to Jail Operations in September 2021.

During his tenure with the Clermont County Sheriff’s Office, Major Boerger was recognized by the Clermont County Law Enforcement Association for his investigative efforts in 2010, 2012, 2013, 2014, and 2019. He has attended advanced investigative courses including Interview & Interrogation and Homicide Investigation at the University of Louisville Southern Police Institute. Major Boerger attended the Public Service Leadership Academy Class #7, John Glenn College of Public Affairs at the Ohio State University, and graduated in June 2019.