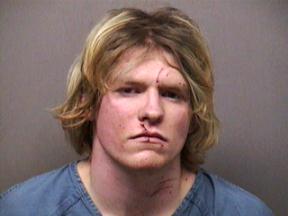 Monroe Township.  On Tuesday 01/29/13 at 8:14 pm the Clermont County Communication Center received a 911 call in reference to a stabbing that occurred at 2143 Berry Road in Monroe Township, Clermont County.  Sheriff Patrol Units responded and discovered a male subject on the front porch of the residence with multiple lacerations to his neck. A witness on the scene advised that the male had been stabbed by an assailant who had fled the scene on foot. A K-9 unit from the Clermont County Sheriff’s Office began a track for the suspect while EMS personnel from Monroe Township responded to render aid to the victim. The victim was transported by Air Care to University Hospital where he was taken into surgery for his injuries. The victim was identified as Nathan Hayes, age 27, also a resident of Monroe Township.  Hayes remains in “stable” condition at University Hospital.

Investigators and the Crime Scene Unit from the Clermont County Sheriff’s Office responded to the scene. The assailant who fled on foot, was identified as Samual Kennell, age 23. Road Patrol units continued patrols of the area and located Kennell on foot approximately two miles from the scene. Kennell was taken into custody without incident by Clermont County Sheriff’s Office personnel.

Kennel was transported to the Clermont County Jail and charged with one count of Felonious Assault, a felony of the second degree. Kennell will appear in Clermont County Municipal Court on 1-30-13 at 10 am for a bond hearing.

This case will be reviewed by the Prosecutor’s Office and scheduled for presentation to the Clermont County Grand Jury.