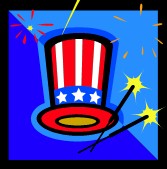 What Types of Fireworks are Legal in Ohio?
There are three types of fireworks in Ohio:  trick and novelty; 1.3G (display fireworks) and 1.4G (consumer fireworks).

Trick and Novelty Fireworks
Trick and novelty fireworks (also known as exempted 1.4G fireworks) include items such as sparklers, snaps, glow snakes and smoke bombs.  In general, these can be sold anywhere in Ohio and can be used anywhere in Ohio. However, some local communities have passed law that prevents these from being sold also.

These are commonly referred to as consumer fireworks.  They include items such as firecrackers, bottle rockets, roman candles and fountains.  A licensed manufacturer or wholesaler can only sell these.  Anyone over the age of 18 may purchase these items, but must sign a form stating that they will transport the fireworks outside the state of Ohio within 48 hours (or 72 for non-residents of Ohio).  These fireworks cannot legally be discharged in the state of Ohio.

A licensed wholesaler may sell trick and novelty, 1.3G and 1.4G fireworks.  In addition, there are nine licensed manufacturers.  They may manufacture fireworks as well as sell fireworks.

What is a Purchaser Form?

A purchaser form is required to be filled out when purchasing 1.4G fireworks.  It requires the purchaser to certify that he will transport the fireworks out of state within 48 hours if he is an Ohio resident and 72 hours if he is not.  A destination must be given.

Are There Penalties for Improperly filling out a purchaser form or discharging illegal fireworks?

First time violations of fireworks laws are first-degree misdemeanors, punishable by up to a $1000 fine and six months in jail.  Subsequent violations are a fifth degree felony.  Violations include falsifying the purchaser form, failing to fill it out, failing to transport fireworks out of state within the specified time period, and discharging fireworks.  In addition to criminal prosecution, licensed fireworks manufacturers and wholesalers are subject to administrative action for violations.

What are the Dangers of Using Fireworks?

All fireworks are inherently dangerous.  Consumer fireworks cannot be legally discharged in Ohio.  For those who choose to use novelty items, the State Fire Marshal urges extreme caution.  While legal, these can still pose serious health problems, including severe burns, injuries to the hands, eyes and face, and even blindness or hearing loss.  For example, sparklers burn at up to 1800°, hot enough to melt gold.  The risk of severe burns is real.  In addition, puncture-type injuries to the eye are not uncommon.  Also, most fireworks require a source of ignition, creating other hazards associated with supplying children with matches or lighters.  The safest way to enjoy fireworks is to attend a show by a licensed exhibitor.

Reprinted from the Ohio Department of Commerce
http://www.com.state.oh.us